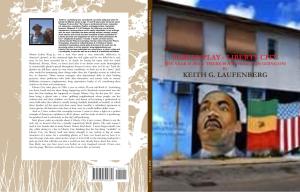 Liberty City is based on a true story (because) it was a true story, it is a true story, and it continues to be so and no, it is not a documentary, although it easily could be. Liberty City is a continuing true story because it is still there, 50+ years later, and it has not changed in all that time. And, the pity of it is that everyone (churches, hospitals, politicians, billionaires) knows it and does nothing about it. Granted it is a very sad story but it is a true story and it reveals how hypocritical this system we live under is as it reveals the truth: Liberty City is a continuing tragedy that plays itself out everyday, somewhere in America, including, as I’ve just mentioned, Liberty City itself, in Northwest Miami, because it is still a ghetto: a ghetto where drug sales, robberies, mayhem, and even murders, continue to this very day.

Martin Luther King Jr., was the only man who ever made any noticeable difference, in these ghetto’s, in his continued fight for civil rights and he was killed for it and, now, he has been “rewarded” for it, in death, by having his name with the word: Boulevard, Avenue, Drive, or Street used after it on almost every main thoroughfare in innumerable ghetto’s spread throughout America’s “inner cities” as if to say: “look the ghettos are still here, in even worse conditions, so don’t try to be a hero.” And, who would be insinuating these things other than the Capitalist society in which we live, in America. Those money managers who discriminate daily in their lending practices, those politicians who look after themselves and answer only to money (lobbyists, insurance conglomerates, drug coporations, banks, et al.) considering these entities to be their “real” constituents.

Liberty City takes place in 1968, a year in which 23-year old Keith G. Laufenberg was there, heard and saw these things happening and is absolutely mesmerized over the bare fact that nothing has happened to change Liberty City, for the past 50+ years, from being a ghetto into a clean, uplifting neighborhood where people can live without fear and their children can thrive and dream of becoming a professional in some field other than athletics: usually boxing, football, basketball or baseball, in which those families (of the sport-star) then move from (usually) a subsidized apartment in (name ghetto, all American cities have, at least, one) to a multi-million dollar estate.

Liberty City was originally called “Model City,” and was supposed to become a model for middle income black Americans and (apparently) was, up until the 60’s, but I never saw that myself and only know that Muhammad Ali stayed there, and in Overtown or Brownsville, also continuing ghettos, because he was lawfully barred from living in Miami Beach because of the color of his skin.
And so, I have written this screenplay because I want to shine a light on a perfect example of American capitalism in all it’s phases: and the truth of what it is prducing, has produced and is (obviously, to this day) still producing.

And, please, make no mistake about it liberty City is just a name, Miami is not the only city in America that has a (usually majoritively black) ghetto: To this day, Miami has at least a half-dozen or more, including the three already named and the only reason I used it was, besides that so many boxers I knew lived there, I never forgot myself, one day, while sitting in a bar in Liberty City thinking that the last thing “available” in Liberty City was liberty itself and always thought it was indeed as big an ironic misnomer of a name, for a crumbling ghetto, as I have ever heard.

And then, in I lived in Vancouver, in B.C. and realized that this country, our neighbor, Canada, seems to have figured out that allowing everyone to have free health care, paying liveable wages, having no racist policies, accepting immigrants from every country and having strong unions actually makes lower-incomes disappear, thereby not producing what America appears to have a lock on: incessant, insidious ghetto’s that deny even the simplist human rights to its inhabitants, including the children who grow up deprived of everything the middle-class and wealthy take for granted: little things: like enough food, clothes, school supplies and, even love, and, all too many times with no role models other than those they see, live with and, all too many times, become. I rest my case.

Keith G. Laufenberg was a juvenile delinquent and joined the Marine Corps on his 17th birthday. He served three years and his novel “Semper-Fi-do-or-Die” was written 30 years later. He has been a professional boxer, carpenter, comedian, car salesman, Realtor, mortgage broker, bartender, bouncer, lifeguard, P.I. & Paralegal. He claims to use all these experiences, among others not so easily identified, in his writing(s). He has been writing articles, memoir, poetry, short stories and novels for over four decades and has hundreds of them published in Literary journals and magazines as well as online periodicals. He has one poetry chapbook, seven books of short stories, seven novels, Liberty City-The Play, three volumes of collected plays, four children's books and two screenplays for sale in bookstores and e-stores worldwide. Visit his website www.@kglaufenberg.com View all posts by kayokeith